Support my blog and open-source work

This post has not been updated in quite some time and the content here may be out of date or not reflect my current my recommedation in the matter.

SQL Views are a handy feature that allow us to save a query whose results are computed/collated dynamically whenever the view is requested. Because the abstraction provided by a view is semantically close to a table we can leverage ActiveRecord to interface with the view through a proxy model and use it to present the result set through ActiveAdmin interface.

This can be very useful for reporting and visual inspection, especially by non technical staff.

The rest of the post elaborates on a simple approach for doing this through code examples. Please note that henceforth we use the term view to refer to an SQL View rather than Rails view templates. Also the code is written for Rails 4 but should be usable with Rails 3 as well.

For the sake of illustration we use an example database containing geographical information of Indian cities. The full code is available here. For brevity we just mention the generator commands and model classes here:

Note: Using the most recent Rails version, 4.1.4, will cause numerous dependency conflicts, hence we use Rails 4.0.0 with ActiveAdmin edge.Since we don't plan to use any cutting edge features in this example this should be an acceptable compromise.

We stick to default Devise based AdminUser for authentication. Once we generate active admin resources for our models, we have something like this:

The view that we intend to create combines the data in the three tables joins. 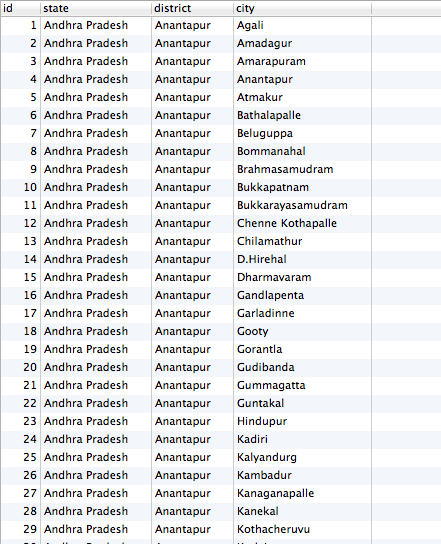 To create the view we generate a migration:

Now a view, as far as read access is concerned, behaves similar to a table, we can just define a normal ActiveRecord model to access this view.

We can take the proxy model for a test drive using IRB:

Now that we have a model, generating an ActiveAdmin resource is as simple as:

At this point upon visiting the index page in ActiveAdmin we might have expected a fancy paginated table but instead we are greeted with a not-so-helpful error:

The problem is immediately obvious if we try to get the attributes of a model instance:

So the question is where is the nil coming from? The problem is that an SQL view doesn't have a primary key. Rails doesn't automatically assume that our id field is a primary key.

We can not somehow add a primary key to an SQL view, that is utterly pointless. However we can force ActiveRecord to use the id attribute as primary key.

And voila. We have our fancy table:

While everything looks great at this point, our setup has a couple of issues that need to be resolved:

If you take a look at schema.rb the problem immediately becomes obvious. Nothing about our view is to be found. The problem is that Rails is blissfully oblivious of our SQL views and the sql statements in our migrations have not introducted any changes in schema.rb. So when you regenerate the database from schema.yml the view will not be created. This has multiple solutions. A simple one is to get rid of schema.rb in favor of sql schema format.

Next time we run rake db:migrate a structure.sql file will be generated that contains the SQL for generating our views.

An alternative option is the gem schema_plus that augments ActiveRecord with support for views among other advanced database features.

Our ActiveAdmin view table has been blessed with Edit and Delete actions for every row, which oviously trigger an error. For example, here is what we end up with when clicking on Delete :

Let us declare the proxy model as readonly.

Next we simply remove the irrelevant actions from the ActiveAdmin view:

Now that the quirks of our setup have been ironed out, feel free to go ahead and try it out. Of course SQL views are not the only solution for a problem like this and the aforementioned table could have been built entirely through DSLs provided by ActiveAdmin. But nonetheless, SQL views are something that most DBAs are already familiar with and is a hassle free setup. If you already have a legacy database with views or need to use views for other auxiliary purposes, the aforementioned approach may make things easy for you.

Any suggestion or criticism is welcome.

The opinions expressed herein are author's personal viewpoints and may not be taken as professional recommendations from any of his previous or current employers.